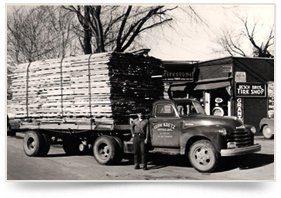 In August 2019, KRETZ TRUCK BROKERAGE LLC, will celebrate its 30th year in business. Terry Kretz started the operation in August of 1989 as KRETZ TRUCKING CO, as division of KRETZ LUMBER CO. INC. Mr. Kretz had twenty five years experience in the trucking industry when he joined the family-owned KRETZ LUMBER in the accounting department. While learning the lumber business he started doing a little truck brokering, moving potato loads for Frito-Lay, much as he had done with his previous employer. Within a few months the brokerage had become a new division of the parent company with Mr. Kretz as its manager.

In 2000, KRETZ LUMBER became a 100% employee owned company. At that time KRETZ TRUCK BROKERAGE LLC was formed with Terry Kretz as the ORGANIZER AND MANAGING PRINCIPAL.

In December 2008, Terry Kretz retired from the employee ownership program of KRETZ LUMBER CO and along with his son Greg formed KRETZ HOLDINGS, INC. At that time negotiations began to purchase KRETZ TRUCK BROKERAGE from KRETZ LUMBER CO. The transaction was completed on April 1, 2009.